As a result of New Zealand’s continued catastrophic performance in their neighboring country of Australia, England has reclaimed their position atop the ICC standings for the 50-over version of the game. Even though New Zealand has already suffered defeat in two of the three One-Day Internationals (ODIs), the team has a chance to reclaim their position at the top of the rankings should they prevail in the last match.

Since England has been so dominant in white-ball cricket over the past several years, they have maintained their position at the top of the rankings for both one-day internationals and twenty-over internationals. However, a poor run of play caused them to lose the coveted top position in ODIs to their competitors, New Zealand, in May of the previous year. Despite this, the incumbent world champions have regained their position as the best one-day international team in the world after winning 10 of their last 13 matches, including series triumphs over Pakistan, Sri Lanka, and the Netherlands. This has propelled them back to the top of the rankings. In the meantime, New Zealand has struggled to get going on their current tour of Australia. They have lost the thread of the game at vital times, which has led to two consecutive losses and ensures that they will lose the series. 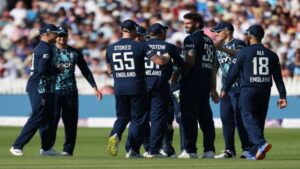 In the first match, the Black Caps were fully in control of the situation after restricting Australia to 44-5. This put the Black Caps in the driver’s seat. However, thanks to Alex Carey and Cameron Green’s partnership of 158 runs, the home team was finally victorious with two wickets left in the game. As a result of Trent Boult’s four-wicket haul in the second game, the Kangaroos were in an even more precarious position than they were in the first game. They were only able to score 195 runs. The New Zealanders were only able to score 82 runs over the course of 33 overs before being bowled out and losing by 113 runs. This was the fourth consecutive time that the Kiwis’ batting performance was a dismal failure.

The current rating for New Zealand is 117, which is two points lower than England’s 119. They will play the last one-day international in Cairns on Sunday, and if they are victorious, they will move up to 119 in the rankings. It has been decided that neither side will participate in any further one-day internationals from this point on until the conclusion of the World Twenty20 in November. This will ensure that the Three Lions maintain their position at the top of the rankings for the foreseeable future.

Following closely after them is another pair of archrivals, India and Pakistan, who now hold the third and fourth rankings respectively and have ratings of 111 and 107, respectively. Australia has moved up to the fifth place, passing South Africa in the process, while Bangladesh, Sri Lanka, the West Indies, and Afghanistan round out the top ten.

Get the latest cricket news and update at 12Bet.