After the first season was a success, the Legends League Cricket is coming back from September 20, 2022, to October 10, 2022, with a second season that will include four privately owned franchises.

Notably, the England captain who won the 2019 World Cup has just announced that he will be back on the field for season 2 of Legends League Cricket. Virender Sehwag, Irfan and Yusuf Pathan, Brett Lee, Muttiah Muralitharan, and a lot of other big names in cricket have recently joined the league.

Morgan said in September that he would play in Season 2 of Legends League Cricket. Morgan was the captain of the team that won the 2019 ICC World Cup. He is only the second player in the history of cricket to score an ODI hundred for two different countries. The Irish-born cricketer led his team in ODIs and T20s and batted in the middle order.

The former England captain confirmed that he would be in Season 2 of Legends League Cricket by saying, “It feels great, and I’m very excited to be a part of Legends. I can’t wait to play in the second season.” 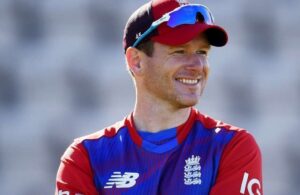 Raman Raheja, co-founder and CEO of Legends League Cricket, said this about Morgan joining the team for Season 2: “We welcome Eoin to the team and are looking forward to seeing his all-around performance on the field in Season 2. His participation will make sure that season 2 is both exciting and fun.”

Raheja said, “We have four teams that are owned by Franchisees, and they will play 15 games in Oman from September 20 to October 10, 2022.”

At the moment, 110 top-level players are in the pool. In early August 2022, a Player Draft will be used to put them on 4 teams. So about 80 of the best cricket players, or “Legends of Cricket,” would play in the next season. India has given the world players like Sehwag, Irfan, and Yusuf Pathan, among others. Australia, England, Pakistan, South Africa, Sri Lanka, and others will play together. The way the league is set up would make it an International T20 League with the most international cricket players in the playing eleven.

Former cricket players from India, Pakistan, Sri Lanka, Australia, England, and other countries played in the first season of Legends League Cricket. They were split into three teams representing India, Asia, and the rest of the world. The Legends of Cricket was seen by cricket fans all over the world. From September 20 to October 10, 2022, the second season of LLC will be played.

Get the latest sports and casino related news at 12 Bet India.