The ICC Men’s Player of the Month for June 2022 goes to England batter Jonny Bairstow, who has been in great form as of late. Bairstow beat out his England teammate Joe Root and New Zealand batter Daryl Mitchell to win the coveted monthly award. The veteran won the award after scoring centuries in both of his matches against New Zealand.

Even though England got off to a slow start in the first game of the three-game series, Bairstow scored 136 runs on the last day of the second Test in Nottingham to help England chase down 299 runs to win. It was the second-fastest century ever scored by an English player in a Test match, and the 32-year-old followed it up with knocks of 162 and 71* in the final Test of the series in Leeds to help his team win another exciting game and win the series easily.

Bairstow hasn’t slowed down either. At the start of this month, during the rescheduled fifth and final Test against India in Birmingham, he scored two centuries in a row to help England get more World Test Championship points.

Our summer has been off to a good start: Jonny Bairstow 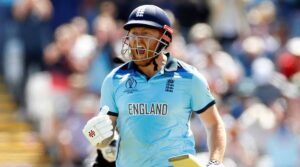 Bairstow has been in great shape lately, and the right-hander was thrilled to receive the award. Bairstow said, “I’d like to thank the fans for making me the ICC Men’s Player of the Month.

The last five weeks have been crazy for England. Our summer has been off to a good start, with four great wins against top teams in New Zealand and India. We are having fun as a team and playing cricket clearly and positively. Even though I’ve hit four centuries during this time, I’d like to give credit to my teammates, who have been great in every way and played with a lot of confidence.”

Farveez Maharoof, who used to play for Sri Lanka and is now on the ICC Player of the Month voting panel, said that Bairstow was a good choice for June.

“Jonny played the key role of the attacker and helped England win the series with his counterattacking knock, which changed the way the series went against the World Test Champions. In Test cricket, these kinds of players are very important, and I think he deserves this praise,” he said.

Get the latest cricket news and update!!