Sunil Gavaskar thinks Rishabh Pant has learned from his mistakes and is now hitting the ball responsibly. Pant got his first century in an ODI against England at Old Trafford in Manchester. This helped India win the three-game series 2-1.

Hardik Pandya and Pant put on a rescue act for India by putting together 133 runs for the fifth wicket. India was down to 72/4 when the two came together and gave the English bowlers a terrible time. While Pandya played a knock of 71 runs, Pant kept playing the big shots that helped his team win.

“It seems like Rishabh Pant has learned from the mistakes he made against South Africa. He chased balls outside off stump to hit them over the leg side, but the way he batted responsibly yesterday shows how well he paced his innings,” Gavaskar said.

Gavaskar told Sports Tak that the way he hit a bunch of boundaries at the end showed that he could handle pressure and then attack.

Pant did a great job in the 50-over games, but he hasn’t found his groove in the T20Is yet. He led India in the five-game series against South Africa, which ended in a tie. Pant couldn’t play a good knock, though. The same thing happened in the T20I series against England, where he didn’t play well.

“We’ll have to see what happens” (whether Pant can replicate this form in T20Is). He might have found the right way to play white ball cricket,” Gavaskar added. 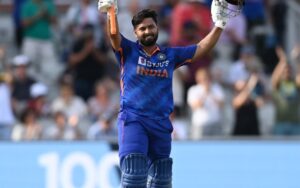 Gavaskar thought that a cricketer has to do a lot of things in both the T20 and ODI formats, but that they do so in different ways for each. Pant has found his place in Test cricket and done well with the red ball, but Gavaskar thinks that Pant is a match-winner who needs a little time to develop.

“T20s are very different from ODIs because you have to start playing in third gear and move up to fifth gear. We need to be patient with Pant and know that when he is ready, he will win us games, but sometimes he will fail. Don’t forget that he only played his first Test match four years ago. He is only 24 years old, and at that age, batters tend to play rash shots because they have a bit of a rush of adrenaline,” Gavaskar added.