After striking the winning half-century in the third Twenty20 International between India and South Africa, the up-and-coming batting star Ruturaj Gaikwad of India spoke candidly about his tendency to play an aggressive game. In order to provide more explanation on the matter, he said that it is all about displaying purpose, regardless of whether a batter is facing his first or second ball or is already well placed at the crease.

After having performances that were not all that outstanding in the previous two games, Ruturaj rose to the occasion in the third Twenty20 International that was played against South Africa in Vizag. He went on to score 57 runs from 35 deliveries at a strike rate that was almost 163. The batsman from Pune was also part in an opening stand with Ishan Kishan that scored 97 runs. Together, the pair forced the Proteas bowlers to work hard in order to take wickets.

Ruturaj Gaikwad’s strategy did not include being reckless or hitting risky strokes as he went after the bowlers. 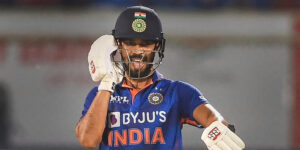 “Going after the bowlers was not an exercise in recklessness or in hitting hasty strokes. I believe that our batting lineup as a whole has particular strengths, specific shots that each of us plays as an individual. It is about supporting ourselves and putting pressure on the bowlers,” Gaikwad said after the match.

“Just making sure that you are showing the intent, no matter if you are playing first ball or second ball, or you are set, even if you are batting at 30-40, if it is there in your area, in your strength, just have to go for it, that is what the thinking is about,” he added.

India was able to produce a formidable total of 179/5 thanks to fifties scored by Gaikwad and Ishan as well as the finishing touches provided by Hardik Pandya, who scored 31 not out.

In contrast to the previous two games, South Africa’s response did not get off to a quick start. This was because the Indian bowlers put a grip on them, and as a result, their run chase did not get off the ground. The visitors were bowled out for only 131 in the last over, and the Men in Blue scored a morale-boosting 48-run triumph to remain alive in the series. The efforts of wicketkeeper-batter Heinrich Klaasen (29) and Wayne Parnell (29)* were not enough to save the situation.

In the meanwhile, South Africa continues to hold a 2-1 lead in the five-game series after claiming victory in the first two games. The action will next take place in the fourth Twenty20 international on Friday, June 17, at the Saurashtra Cricket Association Stadium in Rajkot.